Midweek Musing #3—Julie Danielson and a pair of eccentrics

I'm delighted to have Julie (Jules) Danielson visit today—among her many accomplishments in the world of children's literature, she's the creator of Seven Impossible Things Before Breakfast, and she has interviewed hundreds of children's book authors and illustrators there. I was a guest on "7-Imp" once, and it was one of the most interesting and fun interviews I've ever done (see it here). If you want to get a sense of who's doing what and what's going on in children's literature today, her blog is a great place to start.   If you're not a "7-Imp" devotee already, check it out.  You will be.

More recently, Jules has teamed up with children's lit bloggers and commentators Elizabeth (Betsy) Bird, Travis Jonker and Philip Nel to create The Niblings, a sort of "Fantastic Four" of commentary, on Facebook and Twitter.  You'll find more links at the end of this piece.

Since I had so much fun preparing my answers to the questions Jules asked me, I thought I'd see if she would be willing to play along here.  She said yes.  Today she answers the Midweek Musings question:  who is one of your favorite characters in children's literature, and why? 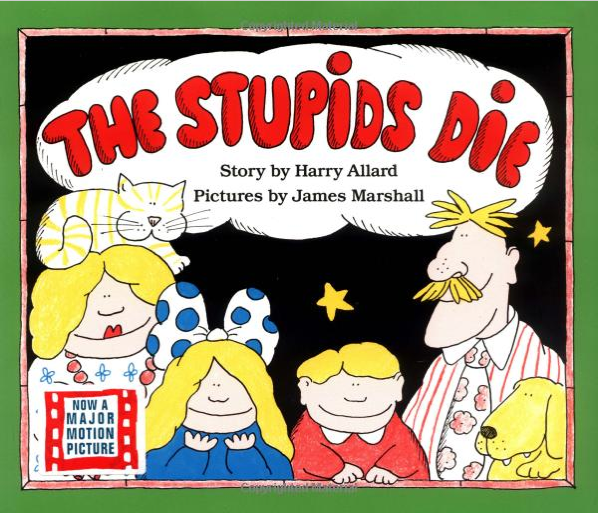 Jules Danielson:  As a fan of the work of author-illustrator James Marshall, I’m fond of many of the characters he created. I could whip up an entire ode to Grandfather Stupid. I’ve shared before at my site my abiding love for him, primarily for this moment when the lights go out in the Stupids’ living room; they all decide they’ve died and must be in heaven; and then Grandfather Stupid comes flying into the living room on his motorcycle, saying, “This isn’t heaven. This is Cleveland.” Here’s to good old-fashioned common sense.

However, with apologies to Grandfather Stupid, I think my favorites of Marshall’s characters are the glorious hippos, George and Martha. In 1997, Maurice Sendak wrote an incisive tribute to these characters, as well as “the fertile genius” of Marshall, in the Foreword to George and Martha: The Complete Stories of Two Best Friends.  In it, he wrote that in the George and Martha stories there’s no “shticking, no nudging knowingly, no winking or pandering to the grown-ups at the expense of the kids.” It’s true. It’s one of the things I love the most about Marshall’s books.

Best of all, though, is the fact that George and Martha are such good friends. They have their arguments. Lots of them. There’s the day that George, a peeping tom, spies on Martha in her bathtub. He ends up going home with the bathtub on his head, Martha angrily shaking her brush at him and saying, “We are friends. But there is such a thing as privacy!” Collectively, they possess a whole host of neuroses, Sendak even referring to Martha in the aforementioned Foreword as “unstable.” (This makes me laugh; who among us isn’t at least a little bit unstable?) But they remain true blue friends. 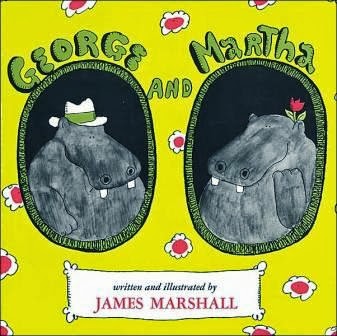 It’s good to have at least one true blue friend in life. If you don’t like your friend’s split pea soup, for instance, and that is precisely what she’s serving for dinner, tell her as politely as you possibly can. Don’t pour the soup into your hippo-sized loafers under the kitchen table when your friend is out of the room. Also remember: If your friend is roller-skating to your house, falls, breaks his favorite tooth, and has to get it replaced with a gold one, tell him how distinguished it looks. Friends always tell each the truth, after all.

It’s also “wonderful to have a friend who knows how to make you laugh,” George tells Martha one day on his birthday. For this, their wry humor, as well as their sense of mischief, their follies, their kindnesses, their wickedness, their fun—all of which make these hippos very human—I tip my hat to George and Martha. 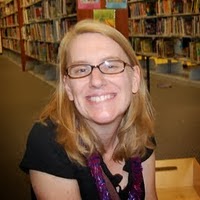 Julie Danielson (Jules) conducts interviews and features of authors and illustrators at Seven Impossible Things Before Breakfast, a children’s literature blog focused primarily on illustration and picture books. Julie received her Master’s in Information Sciences, with a focus on children’s librarianship. She has juried for the Society of Illustrators’ Original Art Award, as well as the BolognaRagazzi Awards for the Bologna Children’s Book Fair in Italy. She writes about picture books at Kirkus’ website, she writes picture book reviews for BookPage, and she teaches a picture book course for the School of Information Sciences' graduate program at the University of Tennessee. Wild Things! Acts of Mischief in Children's Literature, written with Betsy Bird and the late Peter D. Sieruta, will be published by Candlewick Press in August 2014.