Stories come from characters.  At least that's how it is for me.

The idea for this blog began with the Keene State College Children’s Literature Festival.  I was one of the speakers this past October, and when I was invited to speak, three years ago, I learned about their Owl Project.  To date, over a hundred children’s book illustrators have donated images of owls, created specifically for the Keene State College Festival Gallery Collection.

At the beginning of 2013, I decided it was time for me to do mine.  So I sketched out the owl who's on the header of this blog.  He's just received a letter, and a ring.  Something has gone wrong for him. 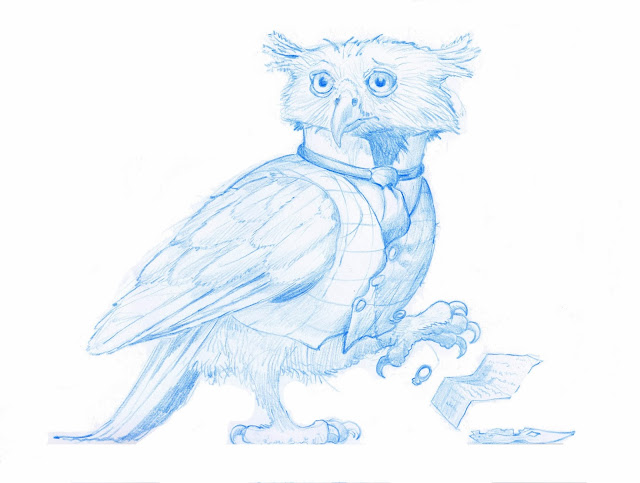 Now, I have to admit it’s been a while since I’ve drawn for fun.  Almost everything I do is for a book I'm already illustrating, or one I hope to illustrate.  This owl was different, a one-off piece.  I didn't have to draw him in forty different positions, or account for a range of facial expressions.  I didn't have to render a complex background.  This guy just was, caught in a moment in his life.  I enjoyed drawing him so much that I began sketching other characters, just as an exercise and a meditation, such as this prairie dog, over-dressed for snow: 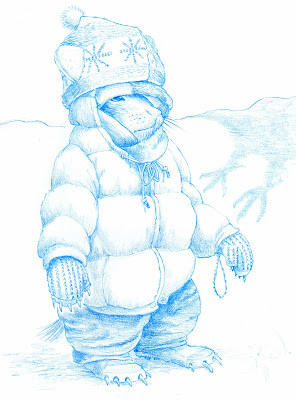 Her insistence that Billy wear extra layers was an argument she'd replay in her head for years afterward.

When I do a drawing like the one above, I'll often think of a caption, which I jot on the margin of the drawing.  If the caption above doesn't make sense at first, look at the snowbank in the background, beyond Billy (note:  these sketches aren't necessarily intended for a picture book audience)

Another sketch was this pensive armadillo: 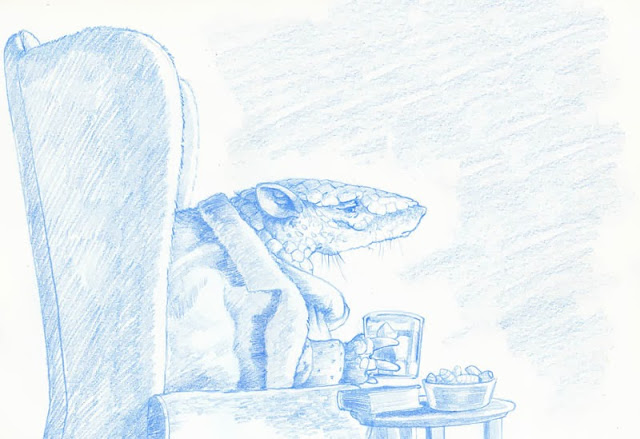 The long winter nights rolled along pleasantly enough—some good scotch, a bowl of imported witchetty grubs and a gripping read.  Yet his mind would often turn to thoughts of Estralita and the Lamborghini.

These sketches sparked the idea for this blog.  What if I formalized the exercise?  Kept my feet to the fire by giving myself daily practice?  I’d post my sketches. . . and do a character a day!

When I was in middle school I tried keeping a journal, but missing a day made me feel like I was failing as a journal-writer.  So the thing became a millstone around my neck, as I struggled to account for everything that happened in my life.  It was awful.

But what about drawing a character a week?  I think I can do that.

So here’s my plan.  Every Monday, starting next week, I’m going to post a blue pencil sketch of a new character here.  I'll welcome comments about the drawing, and suggestions of things I might add to it.  Over the course of the next few days, I’ll do a finished painting of the character in acrylics, and will post the finished piece on Friday.

In between, I'll post some thoughts about characters in children's literature who I think are particularly interesting to me, and maybe prod some of my author/illustrator friends to offer some insights into how they create their own wonderful characters.  I'll probably also post some characters I've drawn over the years who never found their way into books.

I’m going to auction these originals.  I don't want to end up with a huge box of paintings knocking around the studio.  The goal here is immediacy, spontaneity, and it feels against the spirit of the project to hoard them.

So on Fridays, at the same time I post the finished character, the original painting will go up on eBay.  If you’re the winner of the auction, I’ll personalize the original to you or to someone you want to give it to (does that goat look like your Uncle Steve?), and it’ll be on its way in the mail.

In the coming weeks, I'll be up and running on Constant Contact, and if you'd like to receive e-mails displaying the finished piece and notifying you of the auction, please come on back to the blog and sign up for them.  That way, you won't have to click on something on Facebook to see how the painting turned out.

So. . . here we go.  I know a lot of interesting characters in real life, and I’m looking forward to creating a bunch of interesting new ones on paper!
Posted by Brian Lies at 11:56 AM 4 comments: