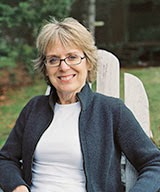 Today's guest blog comes from a writer who always cracks me up—Barbara O'Connor.  She creates distinctly delightful and odd characters who could only exist in the American South.  They carry names like Earlene, Stumpy, Preacher Ron, or Miss Delphine, they compose earnest lists of things they should do (or painful lessons they've learned), and concern themselves with abandoned babies, spelling bees or one-legged pigeons.

And—full disclosure here—I've been in a critique group with Barbara O'Connor for many years, which means I've been part of a lucky group who gets acquainted with these characters before anyone else does (as those characters might say, thumbs in ears and fingers waggling, "Neener, neener!").

So here is Barbara O'Connor, answering the question, "Who is one of your favorite characters in children's literature, and why?" 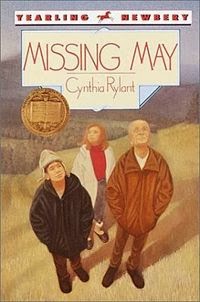 One of my favorite characters? Easy! Cletus Underwood from Cynthia Rylant’s amazing Missing May.

[BL interruption:  for those who have not yet had the pleasure of reading Missing May, here's a brief synopsis from Amazon.com:
When May dies suddenly while gardening, Summer assumes she'll never see her beloved aunt again. But then Summer's Uncle Ob claims that May is on her way back--she has sent a sign from the spirit world.Summer isn't sure she believes in the spirit world, but her quirky classmate Cletus Underwood--who befriends Ob during his time of mourning--does. So at Cletus' suggestion, Ob and Summer (with Cletus in tow) set off in search of Miriam B. Young, Small Medium at Large, whom they hope will explain May's departure and confirm her possible return.]

Barbara O'Connor:  I’ve expressed my love for all things Rylant for years and have credited Missing May with being my ultimate inspiration.

While I certainly love feisty, determined Summer and dear old heartbroken Ob, Cletus is the dude who grabs my heart from the get-go.

I’m not going to call him “quirky” because that term seems too stereotypical to do him justice. More appropriately, he is unique, oddball, nerdy, smart, honest, whacky, and lovable.

Rylant’s skill is evident when she shows the character of Cletus through Summer’s eyes, yet the reader is able to see him more clearly and honestly. Despite Summer’s somewhat mean-spirited view of him, his goodness shines through.

Summer introduces him this way:

I swear. When Ob spotted him snooping around the old Chevy last fall I warned Ob to have nothing to do with him. I’d been riding the school bus with Cletus for a year, since his family moved up from Raleigh County, and I had decided he was insane.

How can you not love Cletus’s potato chip bag collection, his beat-up vinyl suitcase filled with photographs, his ability to create stories from Brylcreem ads, his hat with ear flaps, and his straight black hair that Summer calls “slimy.”

But most of all I love his heart. Summer worries that Ob’s belief that May is returning from the dead is going to make him “sick or crazy.”  But Cletus responds, “Least it gives him something to do. Gets him out of bed in the mornings.”

And while I loved Cletus from the minute he showed up snooping around that beat-up Chevy on the mountainside, it took Summer longer to see his true character.

The front door opened to us, and standing there was Cletus. And I knew, in an instant, that this was not the same boy who had been coming to us with his battered old suitcase all these weeks. This was a different boy, and I knew, even before I set one foot inside his house, that here in this place, he was a much-loved boy. It’s funny, how you can know something like that right away. How you can see in someone’s face the he feels completely safe and full of power and love, and suddenly things between you become so easy.

And then, of course, Rylant ices the cake with this:

May would have liked him. She would have said he was “full of wonders,” same as Ob.

So there you have it: a character “full of wonders.” A character I adore in a book I adore written by an author I adore.

Barbara O’Connor is the author of award-winning novels for children, including How to Steal a Dog, The Small Adventure of Popeye and Elvis, and On the Road to Mr. Mineo’s. Drawing on her South Carolina roots, Barbara’s books are known for their strong Southern settings and quirky characters. In addition to six Parents Choice Awards, Barbara’s distinctions include School Library Journal Best Books, Kirkus Best Books, Bank Street College Best Books, and ALA Notables. She has had books nominated for children’s choice awards in thirty-eight states. Barbara is a popular visiting author at schools and a frequent speaker at conferences around the country.