“It’s no fun having your heart ripped from your body, slammed to the floor, and stomped into a puddle of quivering red mush.  It’s even less fun when it happens three times in one afternoon.”


So begins David Lubar’s My Rotten Life:  Nathan Abercrombie, Accidental Zombie.  You think fifth grade is tough?  Try going to school after a science lab accident turns you into a half-dead zombie.

Anyone who has read David Lubar’s funny and quirky books has to assume that he has a quick and acerbic wit.  Anyone who has met David Lubar in real life knows it.  The author of thirty books for young readers and teens, he thrives on (s)wordplay, wielding words like an épée—poking, prodding and feeling for the funny bone.

Today, David Lubar visits “Getting Into Character” to reflect on choosing one of his favorite characters in children's literature.

David Lubar:  Whenever I’m asked to name my favorite childhood book or character, my reflexive response is, “Freddy the Pig. He was a pig who lived on a farm, wrote poems, solved mysteries, and managed to avoid becoming anybody’s smoked breakfast meat.”

While all of this is true – I loved that series as a kid – there’s a problem. I just told you everything I remember about Freddy from my dim, ancient days as a voracious young reader. I can’t recall anything else about the little porker. Happily, I’ve had two more shots at spending time with kid’s books since then: Once, for a decade or so, as a parent reading bed-time and other-time stories to my daughter, and now, for several decades, as a writer for young readers. So I have no excuses. I’ve met slews of characters recently enough that the impressions linger.

There’s also the problem of whether to be honest, or to try to be impressive. When I see one of those READ posters, with a celebrity holding a book, it’s usually pretty obvious whether we are in the presence of book love or ego (War and Peace? Really? Yeah, right.).  I could pick the Mad Hatter, and cite his philosophical statements. That would make me look deep. Or I could dig up some obscure character nobody has heard of, to make myself look like a kidlit expert. But I want to keep this authentic.

So, who to pick. As I ran some father/daughter favorite bedtime stories through my mind, a chubby face leaped out, and I knew my search had ended. One of the bakers from In the Night Kitchen looks exactly like Oliver Hardy. In my youth, Laurel and Hardy movies were as ubiquitous on TV as Law and Order is today. But a lot funnier. Stumbling across that beloved face in baker’s garb in the middle of a milky fantasy brought back a lot of happy memories. So, yeah. That’s my pick. The nameless baker with the tiny mustache. Because I know that as soon as Mickey zooms away, a skinny baker with a derby on his head will somehow spill the milk, kill the yeast, and set the oven on fire. And then, he will apologize.

Thanks for stopping by, David.  I’m looking forward to reading Wipeout of the Wireless Weenies and Other Warped and Creepy Tales! 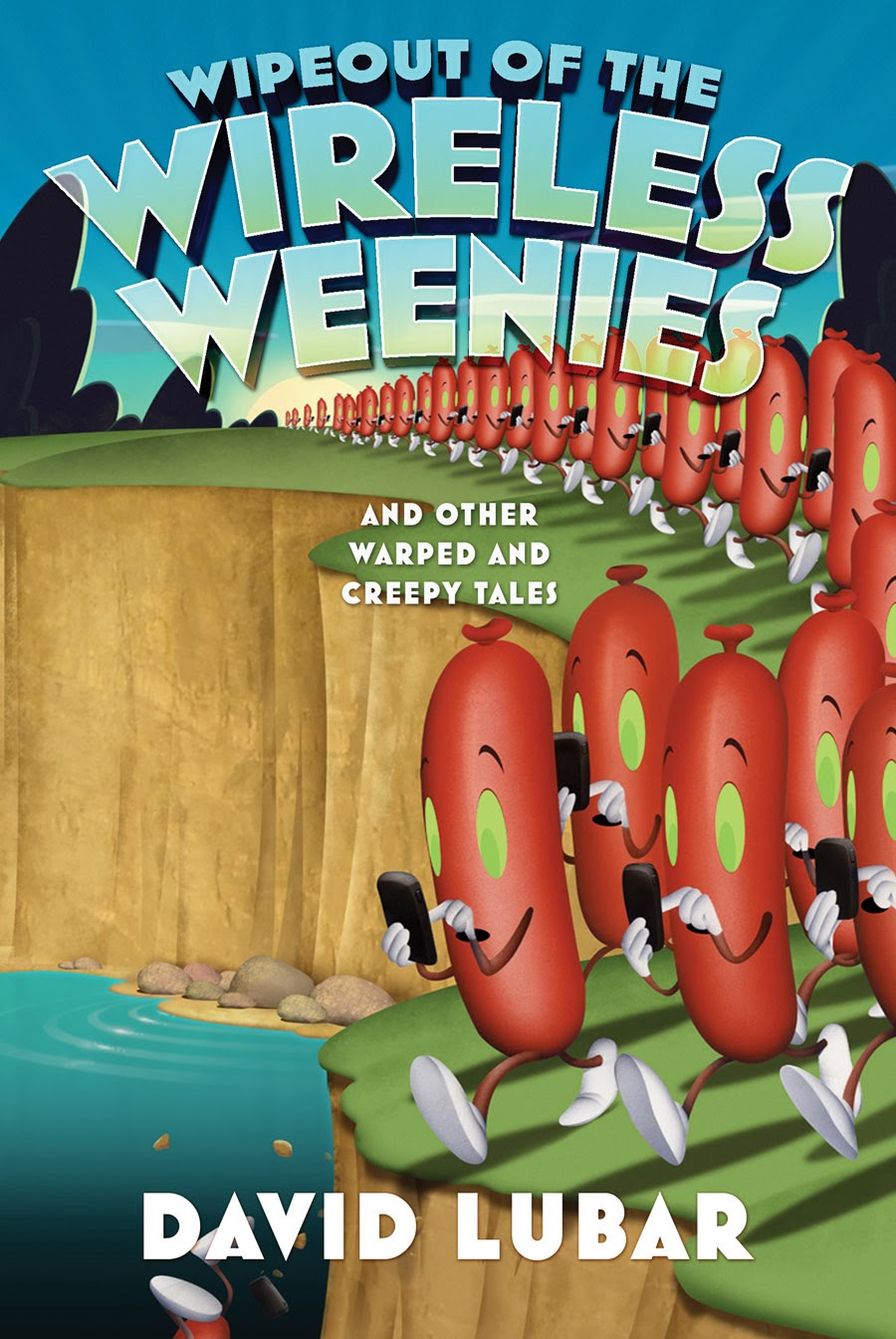 David Lubar’s thirty books for teens and young readers include the novels  Hidden Talents and Sleeping Freshmen Never Lie.  His comic zombie story, My Rotten Life, was recently optioned by Minds Eye Entertainment. His popular Weenies story collections have sold more than two million copies.  Each book contains thirty stories that have been described as “Twilight Zone for kids.” The newest book, Wipeout of the Wireless Weenies and Other Warped and Creepy Tales, shows the horrors that can happen when you wear the wrong hat to the bus stop, forget to clean the litter box, play a practical joke with a coffin, or spend too much time on the phone.

To learn more about David Lubar and his work‚ including his latest book, Wipeout of the Wireless Weenies and Other Warped and Creepy Tales, check out these links:

Web site:  www.davidlubar.com
Twitter:  @davidlubar
Posted by Brian Lies at 6:00 AM No comments:

Email ThisBlogThis!Share to TwitterShare to FacebookShare to Pinterest
Labels: David Lubar, Freddy the Pig, In the Night Kitchen, Midweek Musing, My Rotten Life, Wipeout of the Wireless Weenies

Ferreting Out a Name

It’s been a while since I’ve posted a new character sketch here.  I’ve been doing a lot of school visits and gearing up for the release of my next book, Bats in the Band, on August 5th.

I’ve also been doing work on an adult memoir written by my late father-in-law, Sam Keith, which will be published in September (First Wilderness, Graphic Arts Books / Ingram).  More on that book later, but if you’re a fan of his first Alaska book, One Man’s Wilderness, you’ll definitely be interested in this new one.

So, time for a new character. Here he is:

Sometimes I know a character’s name right away, and sometimes it eludes me.  Does this guy look like a Curtis?  Timothy? Randall?  Maybe this is one of those characters who ought to remain a mysterious and unnamed “he.”  As to his profession, he may be a banker, a dealer in motor vehicles, or a cardsharp.  He certainly doesn’t stay in one place for too long.

He seemed to want an oval background, to help place him into a particular timeframe, and I think in a finished painting, he needs to be tonal, with just a splash of color—a red carnation in his lapel.  A symbol?  Maybe.

As in the past on this blog, you’re welcome to comment on the sketch.  Then I’m going to take this guy to finish, and the final painting will go up on eBay.

Thanks for visiting!  And stop by next Wednesday (April 23), when my guest blogger will be the witty David Lubar.