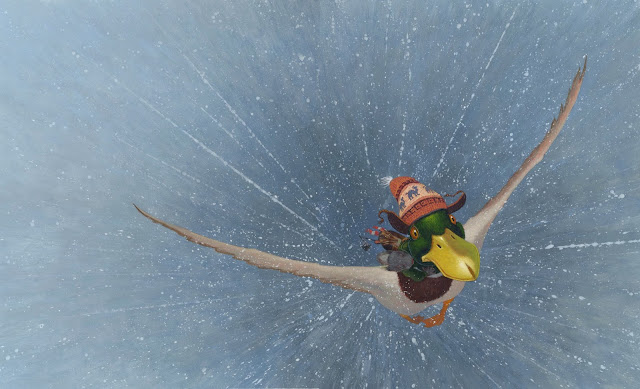 This post comes care of Lindsey Rakers, one of the children’s librarians at the Duxbury (MA) Free Library, who did one of the kindest, most surprising things ever.

At the launch event for Got to Get to Bear’s!, she presented me with a knit hat—and it took me a moment to realize that it wasn’t just a hat that looked similar to the hat that Bingle the duck wears in the book, with its llama pattern and ridiculous ear flaps—she had actually MADE THE EXACT HAT FOR ME!  Bingle’s hat was
instrumental in my figuring out his distinctive, squawking voice (“Slippery, innit?” he asked)—before I’d sketched the hat in one of my character studies, he was just a duck.  Seeing something that I had drawn and painted numerous times, stitch by stitch—in real life—was kind of overwhelming.

Lindsey also generously offered to share the pattern for the hat, so any knitter can make a replica.  I have to say that this reads like a secret code to me.  My grandmother was a knitter, so I'd seen it done before, but it still remains kind of a mystery, a sort of magic.

Here’s how Lindsey made the hat: 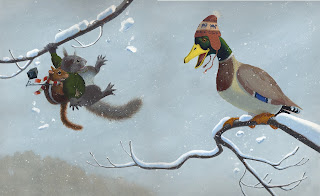 Lindsey Rakers:  Has there ever been a picture book that so accurately captures hand knit clothing like Got to Get to Bear’s!? I’d be hard pressed to come up with one. After reading the book I just knew I had to try one of these awesome pieces and Bingle’s hat seemed the perfect choice! I dove into my stash for appropriate yarn and researched the heck out of earflap hats before finding the Snowflake Stranded Hats by Premier Yarns Design Team. Their original pattern is available for free on their website. I made minor adjustments to the pattern to make it a bit larger and to accommodate a taller color work panel. Depending on who you are making it for you might want to stick to the original pattern and just substitute in my chart for the snowflake.

You can find the original pattern here: https://www.premieryarns.com/products/snowflake-stranded-hats-free-download

Check out Got to Get to Bear’s! here or at your local bookstore!

Here is the pattern with my adjustments highlighted:

Ties Cut 3 pieces of CC, 32” long. Cut 9 pieces of MC, 32” long. Holding pieces together as one, attach to bottom of Earflap. Separate pieces into 3 groups each of 2 CC strands and 6 MC strands and braid together. Tie ends in a knot, trim to even ends. Make a Pom-pom using Clover Pom-Pom maker. Sew to top of hat. Weave in ends. 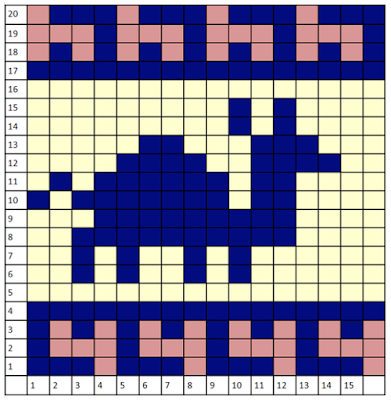 BL:  Thank you, Lindsey, for sharing this pattern, and—once again—for such an extraordinary gift!  Here’s the hat up close, and Bingle as he appears in the book.

Posted by Brian Lies at 9:07 AM No comments: